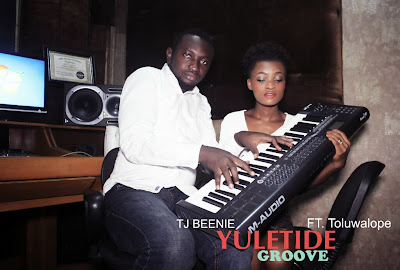 "TJBEENIE,fully named Toluwase Ebenezer Ayo is one of the best talented producers ever known worldwide. He is also a prolific songwriter,a musician,a photographer and a video director. A graduate from Audio Institute of America in Recording Engineering and Music Production(2011),he is the CEO of HQ Media and Founder of the #1 online gospel TV station,PromoteGospelTV. Hails from Ilesa,Osun State and the last of four in the family. He staged THE EXPERIENCE in 2010 as the lead pianist for the House On The Rock Choir Performance alongside other artistes like Don Moen, Chevelle Franklyn,Micah Stampley,Kirk Franklin,Sammie Okposo and the likes. His first single was released in the middle of the year and here he is again with a groovy yet soul-inspiring gospel jazz music for the season "YULETIDE GROOVE ft Toluwalope. He is happily married to the sensational gospel artiste TOLUWALOPE who is also featured on the song. Listen and Enjoy!"