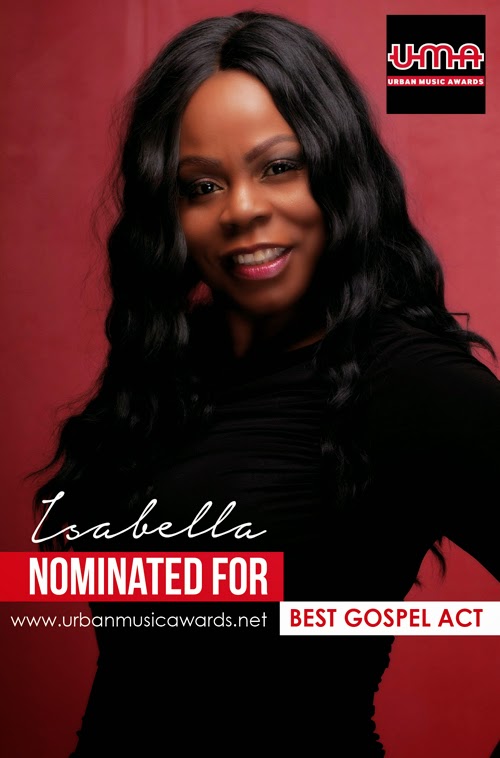 The prestigious European Urban Music Awards and the UMA Academy recently announced the nominees for this year’s highly anticipated 12th annual awards ceremony taking place on the 15th of November 2014 in London. Who else but our own UK-based Lady Isabella was the ONLY female Gospel artist and the ONLY Nigerian nominated for this esteemed award under the category of Best Gospel Act.

As if that was not enough to showcase the glory of God upon the life of this exceptional, inspirational and anointed minstrel, her now widely recognised name was announced as one of the nominees in the category of Best Gospel Act for BEFFTA Awards UK which is billed to hold on 24th and 25th October 2014, also in London.

What is remarkable about these nominations is that both awards are secular events celebrating the very best in music and the arts; proof that Isabella's light is shining very brightly and affecting the world to the glory of God.
As one of the foremost in-demand Gospel artistes and worship leaders of African origin in Europe, this is what Isabella had to say about her nominations


"I am really amazed and deeply humbled by these fantastic nominations alongside some truly amazing artistes. Through the excitement and hype of it all, I have to keep reminding myself to remain focussed on God's purpose for shining the spotlight on me. The real purpose is to, through it all, point the world to Him! I am so honoured to be His chosen vessel and I do not take my assignment lightly. There is yet so much work to be done and, I know the Lord is orchestrating everything for His glory. I also want to use this opportunity to encourage friends, family and supporters to continue to support Kingdom work in any way they can. I am very grateful to receive such great honour indeed".

This has been a phenomenal year for Isabella indeed as she has been nominated for more awards than we can mention here including Gospel Music Awards Italy, African Gospel Music Awards, AFRIMMA, Gospel Touch Music Awards and Jump Video Awards, among others. Not forgetting that she brought home the much coveted trophy for Best Female Artiste in Diaspora from Nigeria's most celebrated Crystal Awards 2014 in July.