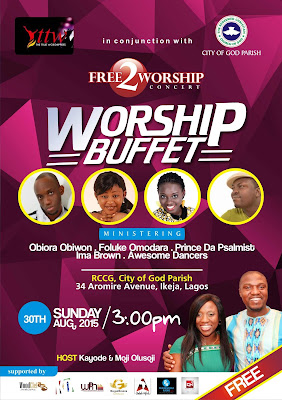 “Free 2 Worship Concert” is an initiative of Kayode and Moji Olusoji. This concert is organized by a group pioneered by this couple  known as “The True Worshippers“. They comprised of seasoned and God-fearing singers and musicians  and the concert is organized in Conjunction with churches and campuses. The concert was formerly tagged “Simply Worship” until 2014 when it was changed to “Free 2 Worship”.
The inspiration behind “Free 2 Worship Concert” is the fact that, we were actually set free and translated from the kingdom of darkness into God’s marvellous light, so that we might worship God. That was why God reiterated it several times when he asked Moses to tell King Pharaoh that, “Let my people go, so that they might worship me…”. God laid constant emphasis on why He was delivering the Israelites from the Egyptians bondage; it is so that they might worship Him. So the concert serves as a constant reminder for all believers, that the reason why we are set free is to worship God.


This worship concert has given birth to some award winning  compositions by Kayode Olusoji such as; Gidi Gan; Mukulumuke; Alujo Continua; I lift my hands; Hosanna ; My life, just to mention but a few, and songs like I Stand Amazed,  I Choose 2 Praise and 2 Good by Moji Olusoji was birthed in the process of this concert.  The concert has also featured some top choir from churches such as Royalty Christian Centre, RCCG National Praise Team, Latter Rain Choir, and professional musicians from churches like Harvest International Christian Centre (HICC), House on the Rock etc. We have also featured some top artists in this concert. Furthermore, we have some artists who are really doing well in the Music Ministry today, who were once members of this group.

The theme for this edition is Worship Buffet. What happened at the Tower of Babylon, when God confounded our languages was actually a blessing in disguise. Today, we can worship God in different languages. Since God feeds on our praise, we can give Him a Worship Buffet.

Free 2 Worship Concert!
It is worship extraordinaire!!
Every reason to be there!!!