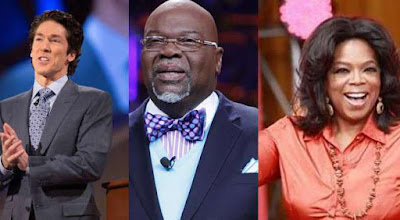 
I discovered a surprising silver lining to the recent controversy over Bishop T.D. Jakes "evolved and evolving" comments about homosexuality, beginning with his unequivocal reiteration of his view "that marriage is ordained by God as a union between a man and a woman" and "that all sex outside of that sacred union is sin and that would include but is not limited to, homosexuality."

As one who had asked him publicly and privately for clarification, I want to thank him publicly, just as I thanked his representative who texted me his statement privately.

But that's not the surprising part of the story.

Instead, what's of real interest to me is that Oprah Winfrey has actually been criticized by gay activists for having Joel Osteen and T.D. Jakes on her network, since both of them affirmed on her airwaves that homosexual practice is sinful in God's sight. Yet she continues to welcome them to speak for her and does not consider them homophobic bigots.

Some would say, "But the reasons for that are obvious. They're both Word of Faith prosperity teachers, they don't preach repentance when appearing before secular media, and Bishop Jakes enthusiastically supported pro-abortion, pro-homosexuality candidate Barack Obama for president. These men are of the same spirit as the world, therefore the world loves them (John 15:18-23)."

I certainly understand those criticisms, but that is not the focus of this article.

What I want to emphasize is that today, there is no subject more volatile than the subject of same-sex "marriage" and the normalizing of homosexual practice, and the moment you say something as benign as, "I believe God designed a man to be with a woman" or "I believe it's best for kids to have a mom and a dad" you are labeled a homophobic bigot.

And if you say those things because you are committed to the Word of God, you are reviled in even uglier terms. You are just not a hater, but you are a hypocritical, fundamentalist, extremely dangerous hater, part of the "Christian Taliban." (This is just a small sampling of what you will be called.)

So I find it fascinating that, with all the criticisms that have come their way, both Pastor Osteen and Bishop Jakes held their ground when asked about homosexuality. Respectively, they told Oprah on her Next Chapter show, "I believe that homosexuality is shown as a sin in the Scripture" and "I think that sex between two people of the same sex is condemned in the Scriptures, and as long as it is condemned in the Scriptures, I don't get to say what I think. I get to say what the Bible says."

In spite of this, Oprah continues to welcome them.

Now, to be perfectly clear, I believe my appeal to the Osteens is as relevant today as it was when I wrote it last year, and I do hope that Bishop Jakes will be more careful when speaking to the secular media about these issues.

But I also find it significant that, on this significant moral and cultural issue, neither of these men have changed their viewpoints in order to appease the spirit of the age and neither of them have been rejected by Oprah (and, it appears, most of her audience).

But for the moment, I'm going to use this all redemptively and, with a wink, tell a non-believing critic, "Hey, if Joel Osteen and T.D. Jakes believe that God loves all people but that homosexual practice is sinful and Oprah doesn't call them homophobes, then you've got no right to call other Christians homophobes because they believe the same things."

So, the next time someone tells you that you're homophobic for speaking the truth in love, tell them to take it up with Oprah :-).

And in all seriousness, regardless of what you think of Oprah, Bishop Jakes and Pastor Osteen, the lesson here is that if you are a genuinely caring Christian, the better someone knows you, the harder it will be for them to reject you as a homophobe.

Michael Brown is the host of the nationally syndicated talk radio show "The Line of Fire" and is the president of FIRE School of Ministry. His newest book is Outlasting the Gay Revolution: Where Homosexual Activism Is Really Going and How to Turn the Tide. Connect with him on Facebook at AskDrBrown or on Twitter @drmichaellbrown