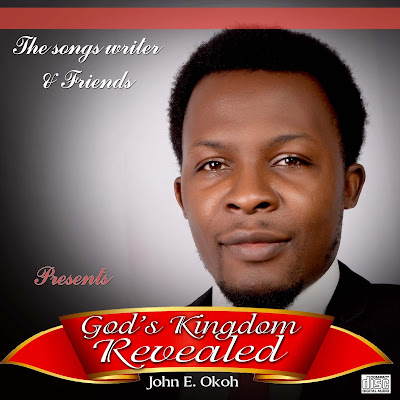 Prolific song writer John Okoh has just release a single of his sophomore album . Here is what he had to say. "This track “Praise Medley” is the 1st among the 15 tracks of my next album (God’s Kingdom Revealed) soon to be released by the Songwriter & Friends. Inspired and produced for both congregational and private high-praise to God. Its lyrical content validates a gospel music genre where God indeed remains the Object of praise. The track is a melody of in-depth praise designed to lift your spirit, soul and body anytime, any-day and anywhere."

About John Okoh
John E. Okoh is a prolific gospel music minister. A multi instrumentalist, Vocalist, Song Writer, Producer, Music Analyst, Music Consultant and a teacher of God’s word. His relationship with the Lord Jesus Christ stated in September 1994. He is a product of the following institutions; Federal Polytechnic NASS, Obafemi Awolowo University,Ile-Ife Osun State and Anglia Ruskin University, Cambridge United Kingdom; where he studied Business Studies, Public. Administration and Business Computing respectively.  He is the president of the Fellowship of Christian Musicians Int’l. An organization whose primary purpose is to expand and establish God’s kingdom in the world of music minds. An Executive member of the Fellowship of Gospel Music Ministers of Nigeria. His maiden album was released in November 2008, titled: "the Kingdom Project" while in August 2011 he came out with "Kingdom Project Dimension - II. Author of the book – “The Music Minister, His Pastor and His Lord”. He is married with a happy family based in Abuja - Nigeria.