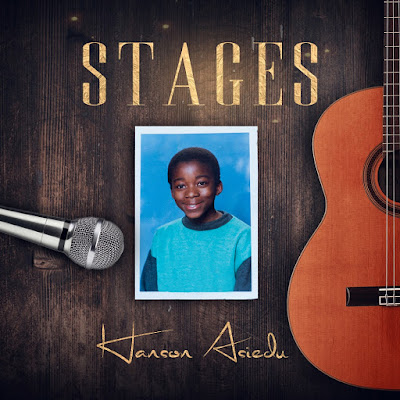 Stages: The EP is a 5 track eclectic collection, with styles ranging from the West African Highlife influenced ‘God Of Your Word’, the stripped back acoustic vibes of ‘Easy On Me’, and the soul-funk fusion heard on ‘Lessons You Learn’.

Recording the EP was a collaborative effort, with contributions from Nigeria, the United States, Ghana, and the United Kingdom.

Hanson Asiedu beams, ‘I am very proud of this body of work. It’s taken me a few years to get it together, so it makes it even more of an achievement for me. I’ve laughed, I’ve cried, I’ve been hopeful, disappointed, even angry at times out of frustration. But all is fair in love and war, and I’ve definitely faced some warfare on this journey.’

Hailing from the rich cultural heritage of Ghana, Hanson says ‘I am the only musical one in my family as far as I know, other than my great grandfather who was a Methodist Church organist.’

The interest and relationship with music started from a young age; from singing and dancing in the primary school playground and being chased by other children asking him to sing, through to convincing friends on the phone that he was Craig David.

Hanson Asiedu has sang in choirs, almost signed a deal in the early 2000’s with an independent record label, and traveled extensively across the UK wherever the music may lead, including busking on the streets of London. Hanson is a graduate of the Academy Of Contemporary Music, Guildford.

Hanson’s faith underpins the songs he pens, lines he sings, and messages he delivers, and his expression of a deeply founded faith in God is undeniable.