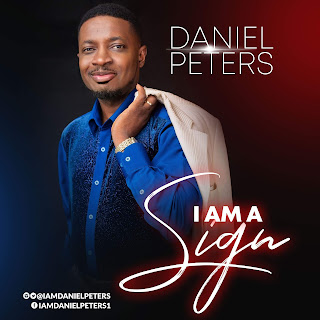 Inspirational, talented songwriter and music minister - Daniel Peters readies to set the Gospel music scene ablaze with his captivating debut single titled - 'I Am a Sign'; with production credits by no other than the award winning music producer and artiste - Ambassador Wole Oni.

Taken from the book of Isaiah Chapter 8 v 18 and Chapter 60 v 1 - I Am a Sign reminds the listener to focus on a loving God who has given us the authority to become great. The new single is a spiritually uplifting warfare declaration song, that will re-establish your hope and dreams in the midst of a troubled world.

''I am so grateful to God for His faithful work in my life. This song also portrays God's wonderful work in me. It will be my joy that I Am a Sign will become a signature tune in the mouth and heart of everyone that hears it, creating an awareness that God has more in store for them than they can imagine!''

Born in Surulere, Lagos state, Nigeria, Daniel Peters was exposed to church and music at a very early age. With his dad being a rhythm guitar maestro and a singer, he grew up watching him perform at various social functions. His mum, who was a devoted Christian took him to Church services regularly. The exposure to these influences, began to make an indelible impact in his young mind and heart.


As a teen, he joined the adult choir in his local church, singing tenor, and was the youngest in the choir at that time. His love and passion to sing was strong, so he often recorded songs on cassettes, playing them back to his hearing and delight.


His uncle also made a huge impact on his young heart musically. Every time young Daniel visited his uncle, he was always playing popular reggae songs from the likes of Bob Marley, Peter Touch, Yellowman and many others. This later as he recalls, gave him a passionate love for Reggae music!

Other artistes who had a major influence on him musically in his early years include the likes of Ron Kenoly, Don Moen, The Winans, Commissioned, Donnie McClurkin, to mention but a few! On campus, he joined an A-capella group made up of 3 other youngsters, ministering gospel songs both in and off campus. He was well known for his zeal to sing.


Blessed with a natural gift of leading praise and worship, Daniel does this joyfully, exuberantly & powerfully by the grace of the one who endowed him - Jesus Christ. Leading people into the presence of God is what Daniel loves to do. He regularly ministers in his local Church, leading praise and worship and taking special numbers with the choir, being a blessing to the body of Christ at large. As a gifted music composer and songwriter, his maiden studio recordings are produced by the multiple award winning Jazz maestro - Ambassador Wole Oni for WOMP Studios.  Daniel's passion is to see men, women, boys, girls, teens, youths, and all and sundry, drawn closer to Jesus via the avenue of his music - Contemporary Reggae.