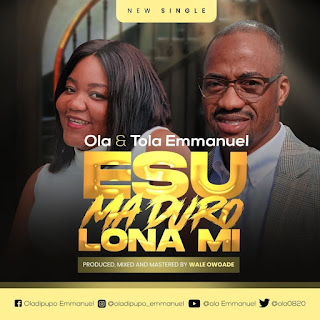 Oladipupo Emmanuel Oluwasomiji aka Ola Emmanuel, was born into the Emmanuel family in August 1983. Ola began his musical career at his church at the age of 8 by leading the Children Salvation Unit choir in The Light Gospel Church. As time went, he later joined the main church choir. The gift of God upon him made him stand out to where he became one of the lead vocalist and eventually, the musical director of the choir.

He is a gifted song writer, singer, and composer, with a lot of songs to his name. Ola’s music can be described as Divine Gospel songs due to depth of the lyrics which are meaningful and impactful. This is a result of spending much time in the Word of God and Prayer.

During his career, Ola had a musical band called Arole Dafidi Gospel band and it comprised of great musicians and percussionists. They made two albums, (Olorun Arole and I can’t Explain) and played at over a thousand weddings and concerts. He has also written and composed songs for himself and various artists all over the world.

Ola served as a music director in Christ Ambassador student outreach (Casor Lautech) and later moved to United States of America to continue being a song writer and lead vocal for the Apostolic Church North America. His songs include “Ba ogbe”, which he wrote when he came out as a solo artist under the name Minstrel Emmy.


He is married to Mary Olutola Emmanuel, a beautiful, God chaser, and God loving woman. Together, they both have songs which includes, “Esu ma duro lona mi”, “Everything bows to your name”, “Jekin Mo”, “Jehovah Rapha”, “Ohun ta da mi fun”, and “Unlimited God” to the glory of God!


Is a song about the authority of the believer and the Divine Assurance that Jesus has conquered the Devil and the world to give us victory.


We need to start walking in victory in light of the finished work of Christ our redeemer.


Listen, be blessed and share this song with all your contacts.